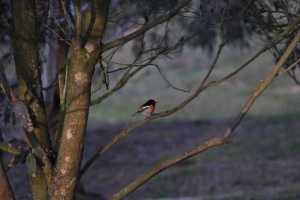 Surveys being conducted by volunteer bird-watchers near Goulburn are aiding the conservation efforts and management of National Parks. In particular, catching a glimpse of the vivid red plumage of the Scarlet Robin is helping to protect the wildlife along the Kanangra-Boyd to Wyangala Link (K2W).

Volunteers from the Goulburn Field Naturalists are tracking and monitoring bird numbers and species in the reserves around Crookwell, 40 kilometres from Goulburn. Members are tasked to complete monthly transect surveys in the Keverstone National Park, Razorback Nature Reserve and Burwood Creek Nature Reserve.

At around 13 centimetres, the tiny songbird can be difficult to spot and volunteers can spend hours combing the trails for signs of the bird, often detecting them by their unmistakable song.

Though the bird was sighted, it was only in small numbers; it has been listed as vulnerable in NSW by the Threatened Species Scientific Committee, which advises the NSW Government on endangered wildlife, and is facing a high risk of extinction.

During winter, Covid-19 restrictions halted the survey which meant it could not be determined if the bird was breeding in the area.

The mostly black bird with its blazing scarlet and white chest, and white-tipped wings and tail is being threatened by habitat degradation and overgrazing.

Field Naturalist Greg Warden said the results showed how important wildlife corridors are for linking the remaining natural areas across the K2W.

“This enables smaller birds to traverse the land in relative safety from predators by being able to take refuge in the corridors,” Greg said.

“We have enjoyed being a part of the Saving our Species program and we hope that our small contribution will help in some way.”

By tracking the birds the Field Naturalists are aiding conservation efforts towards the recovery plan and long-term security of the Scarlet Robin and other threatened woodland birds in the Southern Tablelands region.

Mary Bonet, project officer of the K2W Glideways program wasn’t surprised by the low numbers of the Scarlet Robin.

“There has been a general decline in the numbers of woodland birds over the recent years, this is due to habitat loss, the extended drought, and the bushfires which burned across south-east NSW. However, the K2W Glideways program is working with land managers along the corridor to protect and restore critical habitat for small birds,” Mary said.

The results of the survey will be used to help protect the Scarlet Robin species before they are entirely squeezed out and to help determine whether current restoration efforts are effective.

“Partnering with volunteer environmental organisations such as the Field Naturalists is allowing us to protect these birds and more species! If volunteers continue to assist the program then I am hopeful that we have a chance of protecting these iconic Australian animals,” Mary said.

The Southern Tablelands is particularly vulnerable to habitat loss with much of the area used for agriculture, infrastructure and urban development, which is stripping the land of nest sites, food sources and foraging substrates.

In NSW, the Scarlet Robin is found in the north-eastern parts along the coast and inland to the western slopes of the Great Dividing Range near Crookwell. The bird lives in open forests and woodlands, and during winter some will visit more open habitats such as grasslands and will be seen in farmland, urban parks and gardens.

The Field Naturalists actively participate in local conservation projects in the Goulburn area to help conserve the flora and fauna found in the natural environment.

The Field Naturalists surveys are part of the K2W Glideways Petaurus Connections, a co-funded Saving our Species program by the NSW Government and the Foundation for National Parks and Wildlife. The program focuses on three threatened species, the Scarlet Robin, the Spotted-tailed Quoll and the Squirrel Glider, across the Crookwell Reserves in the Upper Lachlan Shire. 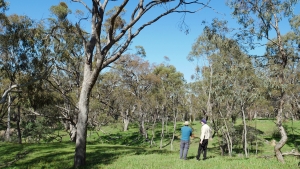