K2W six years in to the Bushconnect program

Around six years ago, the K2W Glideways Link Partnership, which supports conservation in the Kanangra-Boyd to Wyangala area, partnered with projects in the NSW Great Eastern Ranges to replenish green corridors, restore riparian areas and give native wildlife a fighting chance of survival.

The NSW Government supported the project through its Environmental Trust, the K2W Glideways Bushconnect project received almost $500,000. The Foundation of National Parks & Wildlife (FNPW) led a consortium of community groups, non-government organisations and government agencies to deliver the funding for conservation activities in the NSW Great Eastern Ranges corridor.

In January, the project completed six years which was co-funded by the Environmental Trust; over the next four years the K2W Glideways Link Partnership will continue this essential conservation work. 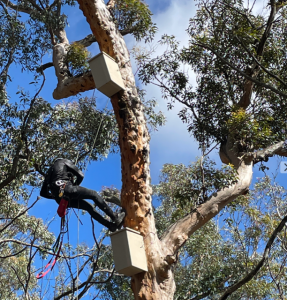 Across three districts, the Upper Lachlan, Blue Mountains and Cowra, the K2W Glidways partnered with the community to deliver the project.

Grazing, urban development and large-scale industrial projects has disrupted the habitat and the abundance of wildlife, and reconnecting the landscape is vital to the survival of native species, including the threatened gliding possums.

“Landholders and local environmental groups are so important in helping to protect and create habitat connections across the landscape,” project officer Mary Bonet said.

“By partnering with the community we were able to restore important areas of native bushland through installing nest boxes and enhancing biodiversity by creating more green corridors,” she said.

“These linkages will continue to preserve and protect endangered and threatened species.”

The K2W Glideways program works with local community groups and landholders on a range of collaborative projects in a section of the Abercrombie catchment, called the K2W Link.

The program aims to restore natural connections for wildlife by relinking the landscape to ensure that our populations of animals persist into the future.

These onground works include controlling invasive species, habitat restoration and protection, revegetation, citizen science and research and monitoring across the Abercrombie catchment.

The region is a major natural connection between the Greater Blue Mountains and Wyangala Dam, and is used by a countless number of species on their daily, seasonal and annual migration.

It is home to five of the six species of gliding possum found in Australia – squirrel glider, yellow-bellied glider, feathertail glider, sugar glider and greater glider – and over 2,400 species of native plants, animals, fish and reptiles.

This area contains an extraordinarily diverse range of species and habitats and is rich in culture and heritage. At the same time, the K2W Link is under threat from increasing numbers of feral animals and weeds, habitat loss due to fragmentation and urban development and has the potential for continued loss of landscape health. Like other animals in the area, populations of gliders have been declining.

“If we do nothing to assist gliders, populations will continue to fall and we will lose them from our landscape forever,” Mary said.

“Through targeted projects in strategic locations, we are working to help prevent further losses, whilst supporting the habitat and connectivity needs of the many other plants and animals that share their homes.

“By meeting the needs of gliders we are also supporting the other plants and animals that share their homes such as Spotted-tailed Quolls, Flame Robins, Booroolong Frogs, Glossy Black Cockatoo, Platypus, and Koalas,” she said.

Reconnecting the landscape at Fullerton Hadley 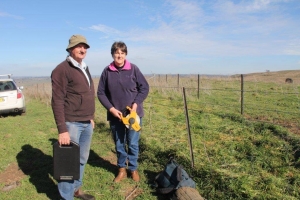 For the Bushconnect project, Fullerton Hadley Landcare coordinated with a team of 20 rural landholders planting hundreds of species of trees.

Nerida Croker, chair of the Fullerton Hadley Landcare group, worked with landholders to create a habitat link spanning around 4622 hectares of pastoral land and remnant bushland along the Fullerton Road.

Together with livestock farmers and property owners, they planted hyundreds of native species of trees and shrubs to create shelterbelts that would connect an important area along the K2W Link.

“My goal was to promote sites for bird monitoring groups and to assist with the protection of native grasses and pastures by reducing the impact of wind and soils and erosion control during times of heavy rain and create awareness of the importance of maintaining and protecting groundcover in control of weeds,” Nerida said.

Shelterbelts also provide protection for stock and manage and improve pastures, she said.

It is an ongoing project with major works being completed in 2013 and 2018, this has led to wildlife surveys and mapping projects around the Fullerton Hadley area.

At times, the project used the assistance of outside groups including The Green Army for tree planting, and it supported the local nursery Wongadee Farm Trees at Laggan.

In 2018, the Fullerton Hadley area was heavily impacted by the drought and lost some of its plantings.

“They’ve had a lot of dry times so we might not have got as good a strike rate as we had hoped,” Nerida said.

“People who were very diligent and put a lot of work into preparation and maintained it had good results.”

Since the partnership was established the Fullerton Hadley Landcare group has had many opportunities to extend its footprint in the area.

“We have invested in a mapping project, the idea of that is to map all these sites onto a database… in preparation for future funding applications,” Nerida said.

As well, ecologists, Peter and Judy Smith surveyed the area for native species establishing a base for any further surveys.

In 2000, the Fullerton Hadley Landcare branch was established and around 10-years later formed a partnership with the K2W Glideways Connect project which has provided funding for projects including reestablishing green corridors and weed control. 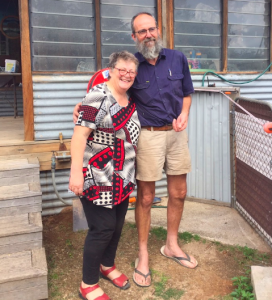 The distinctive call of the Yellow-bellied glider can be heard in a conservation area of the Rocklily Wombats wildlife refuge in the Blue Mountains National Park giving hope to its owners, Dianna and Warwick Bisset.

Since the Black Summer bushfires of 2019-20, Rocklily Wombats partnered with the K2W Glideways Bushconnect project to provide nest boxes for wildlife affected by the bushfires, including the Greater and Yellow-bellied glider.

It is hoped that these nest boxes will last for up to 25 years in that time providing shelter for animals until natural tree hollows can reform after parts of the refuge were burned by the Greenwattle Creek bushfire decimating the natural habitat.

Dianna said the bushfires burned many large, old trees and hollows which are used by native animals for shelter and breeding.

“With almost no hollow nest sites in the burnt-out landscape… We have started a project of building and installing nest boxes to replace all the fully burnt tree hollows that no longer exist.

“We’re doing this to give the colony a chance to breed up and expand,” Dianna said.

Before the fires, the Gang Gang Cockatoo and colonies of gliding possums were surveyed in the area. As well as providing nest boxes for the glider species, and Gang Gang Cockatoos additional nest boxes and cockatubes – an artificial nesting hollow designed for cockatoos – they targeted other species including the King Parrot, Crimson Rosella, Kookaburra, Grey Strike Thrush, Owl, Wood Duck, Black Cockatoo.

Moving forward the boxes will be monitored using wildlife cameras and surveys and will be moved according to usage. 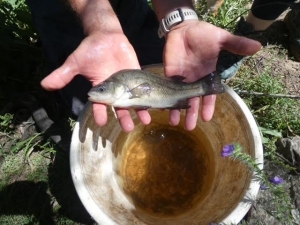 Sharon Fulcher the owner of Two Rivers bordering the Abercrombie National Park is restoring riparian corridors on her property to protect native wildlife.

Four years ago, Sharon purchased the 537-hectare property. The property has frontage to the Abercrombie River and the Isabella River, providing important riparian corridors for these river systems, the property also features steep gorge country.

She partnered with the K2W Glideways Bushconnect Project to replant native species of trees and plants to regenerate some areas.

Sharon’s intent is to restore around 10 per cent of the property which was most affected by farming practices around 50 years ago which cleared areas of woody grasslands.

“All around us are sheep and cattle properties and to the immediate north and west of us are pine plantations,” Sharon said.

“It’s an important property because it has a really big riparian area along both rivers,” she said.

Sharon coordinated the revegetation of around 1000 square metres along the river flats near the Abercrombie River.

“We made several small corrals but over a reasonably sized area,” Sharon said.

“We had to put vegetation cages in everywhere in between the existing trees to encourage growth and to keep all the other animals off it, that was the only way we could protect them,” she said.

“It was about a kilometre we had to walk everything in; fence posts, the wire, plants and we had to go down to the river and bring the water up because everything was watered.

“Then, in the drought, we lost water in the river and then we had all the fires just to the east of us. It is such a heavily wooded area it was really too dangerous to go there and we really lost quite a lot, we didn’t lose everything but we lost 50 per cent of what we originally put in.

“It was a bit disheartening,” she said.

“Just after the fires and the drought we had the Department of Primary Industries survey just below where we had fenced, there was a survey done 20 years ago and we knew they were there but we hadn’t seen the Boorolong Frog or the Macquarie Perch. 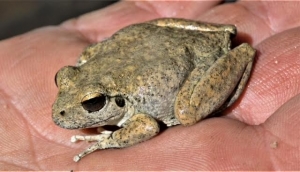 A rare sighting of the Booroolong Frog.

“The DPI came and did a survey and caught turtles, platypus, the Boorolong Frog, which is great, and several fish which they then have taken away to put into a breeding program.

“They also showed us little crustaceans and native yabbies and native prawns – it was a really good survey because it just confirmed that what we were doing is really important,” Sharon said.

“That area, it will be continually monitored, it’s not set and forget. We might have to spray every year, and some plants will die, and we will just keep adding to it and fill in the gaps in the vegetation, and check the fencing so the creatures don’t break-in and trees and branches fall down on the wiring.”

Sharon will continue to revegetate areas of Two Rivers and has received a grant from Landcare to plant 400 species of plants over three hectares. She is also controlling invasive plants, including serrated tussock, and pest species, including feral goats.

She is also working on increasing the species of insects and biodiversity of plants to attract more wildlife, including birds.