The K2W Glideways project has teamed up with conservation start-up Habitat Innovation and Management to install Habitech nest boxes for wildlife populations across the Greater Blue Mountains to Wyangala Dam.
Project officer Mary Bonet is trialling an advanced type of artificial hollow designed by ecologist Mick Callan that will provide new homes for a range of hollow-dependent species including micro bats, gliding possums and small parrots.

They are calling on landholders in the Kanangra Boyd to Wyangala vegetation corridor to be a part of the project by installing the hollows at their property. They are aiming to install 50 nest boxes across the Upper Lachlan, Oberon and Wollondilly Shires in areas impacted by the 2019-20 bushfires. 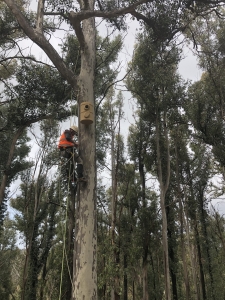 Early trials have been successful with small parrots and squirrel gliders inhabiting the nest boxes within a week of installation, said Mr Callan, who hopes to work with conservation groups to offset large-scale projects impacting the environment.

“It takes more than 100 years for a tree to form a natural hollow,” he said.

“Land clearing has had a major impact for hollow using species, whether that’s in an urban landscape with housing developments, or whether it’s farming systems where they’re wanting to put in more efficiency by removing trees.

“Typically the largest, oldest, or dead trees are removed and they are most likely to have hollows. It’s a real problem and given that it’s 100 years to form natural hollows we’re not going to see any improvement in the natural state anytime soon.

For this project, Mr Callan and a team of researchers at Charles Sturt University modified the traditional nest box to build a revolutionary type of artificial habitat that closely mimics the microclimate of a real tree.

By using 3D technology they engineered a hollow that will maintain an ambient temperature all year by buffering extreme temperatures at either end of the scale.

The new model has a double-walled plastic outer with a timber internal chamber which is more similar to naturally occurring hollows and its appearance is designed to blend in with the surrounding bushland.

Habitat Innovation and Management worked with industrial designers, engineers, and ecologists to further enhance the model, and they have begun manufacturing the modular nest box system from a warehouse in Orange.

Habitech nest boxes can be attached to trees, posts or walls using a bracket system. The preferred method is to scar the tree below the cambium layer (the trunk) and attach the bracket system using stainless steel screws. As the tree produces new wood it will grow over the bracket securing it in place for the long term.

This project was funded by the International Fund for Animal Welfare supporting Australian wildlife and communities across eastern Australia. 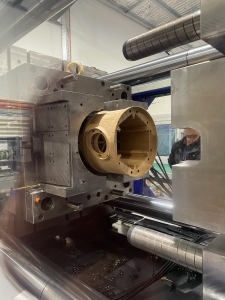 Habitech nest boxes are manufactured in Orange in the Central West. 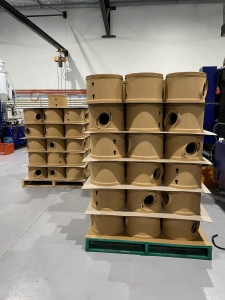